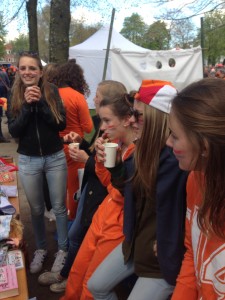 Road to Perth 2015 started off with the yearly Kingsday sales. For the non-Dutch, a detailed explanation by John Fealey can be found below. These Kingsday sales are a great opportunity for the Road to Perth participants to have a day of team bonding while getting in some sponsor funds for Road to Perth. With the weather being on our side, the girls had a perfect day to really start off their Road to Perth campaign!

In the weeks leading up to Kingsday the girls thought of several ways on how to make money on Kingsday. Apart from the usual business on Kingsday (trying to sell everything that’s been in your basement for years) the girls had more great ideas to raise funds. 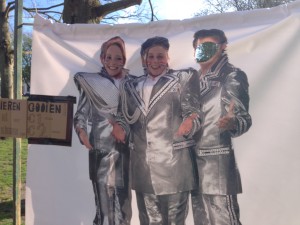 Lots of funds were raised by baking and selling brownies and cupcakes. Brownies proved to be the perfect choice for a snack during the day. Altogether, over 30 brownies were baked and sold to hungry visitors. This in combination with the introduction of games to our stand made sure the girls had a very good Kingsday. Several games were played, like throwing eggs at the participants. For just €2,- you could throw 3 eggs at a participant of your choice.

The “challenges” were also a good attraction. The girls thought of two different challenges.

Overall, Kingsday was a very good day for the Road to Perth – girls. The biggest cheer came at the end of the day after we counted the funds raised. From the start, it was a goal to break the previous record set by the Road to Perth 2014 – girls (€276,-). This year, the girls raised the bar again to an awesome €332,40!!

Thanks to everyone for coming out to support us!